A stylish mix of design & future-forward tech—all on an EV skateboard chassis. Polestar reminds automakers that the best marketing is: make cool cars.

Finally. As a longtime fan of electric vehicles, a well-executed concept from a real brand like Polestar that builds on an EV’s inherent strengths—and isn’t painted some sort of frog green—well, it’s nice to see.

In addition, the Polestar O₂ concept uses a modified chassis from its upcoming Polestar 5 sedan, demonstrating this isn’t a completely pie-in-the-sky design.

It’s the drone-in-the-sky design, actually, that has people—including tech experts like Marques Brownlee—talking:

You know what this is? This is the TV show Viper coming to life, minus the rockets and mom jeans. (I had to ask for permission to stay up past my bedtime to watch the series premiere…I was 10.)

See, Polestar have perhaps unintentionally landed on a trick here, one that anyone who’s tried to take footage out of a moving car can attest to: it sucks. For an outlet like speedster.news, you bet I’d love to use a drone-equipped Polestar O₂ to safely (but closely) follow automotive action…†

If you work at Polestar and open to letting me borrow it for a morning to film some news, I’m all ears. ;)

Not so much a track day, but perhaps for external shots in a review? To follow a members-only canyon drive? Even as a stable but informal filming platform for newsworthy events, like Le Mans, a drone + mobile takeoff and landing platform suddenly becomes viable so long as the airspace isn’t restricted.

At the very least, I hope there’s a mode where the drone hovers ahead of the car to find a parking spot more quickly.

It did, however, share its strategy for reducing materials waste: “mono-material,” the practice of utilizing a single material in different forms (here it’s recycled polyester) for as many components as possible. The O₂ concept has recycled polyester for all soft parts, from foam to “non-woven lamination”.

Production? Keep calling Polestar until it relents and builds it. (You never know, we might get a season of Viper O₂.)

† If anything says ‘speedster news’ more than a convertible filming rig…I haven’t found it. 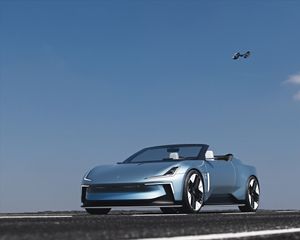 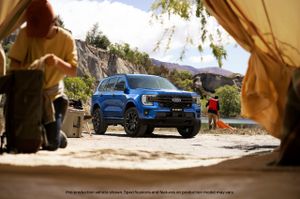