⚑ Minimalism is made.

In this newsletter, you’ll read about why it’s equally silly for an automaker to show off a minimalist sculpture as it is to build overweight vehicles “sustainably”.

My energy level today has been up and down—mostly down—more on this for subscribers!

I wonder what other Stellantis employees think when a brand like Lancia can hold multiple events with classic cars previewing a relaunch. On the day, there’s a nip’d and tuck’d logo, a fou-fou design language, and a giant key fob. None of those three items are cars—in case I’m not being clear—no matter how effervescent Micalized Blue looks inside the Mad Hatter’s second dining room.

Let it end here and now. Automakers, I beg you. This never works.

We all want the same things. Everyone LOVES Lancia. We want Lancia to succeed. We even have money to buy Lancias!

But first, there’s this thing called showing off a car to buy. Then people Venmo 55,000 Royal Simoleans or whatever it is Lancia will charge, and skilled Lancia workers make A Thing!

Allowing the long shadow of past greats to dictate Lancia’s current ethos doesn’t make sense to me—the brand has one exit plan (as I see it) and this ain’t it.

Crafting these narratives on classic cars, building to a launch—then showing a giant ergonomic computer mouse—is like having a fashion show by pushing the clothing racks onto the stage. Oh…I clap now?

Style, distinctiveness, fashion…they’re all subjective, driven by trends, sure, however not immediately fruitful if you’re an exec trying to sell cars. Brace for a continued period of courtship between Lancia and a mirage of style, influence, elegance. No doubt with compelling, enjoyable professional events, and plenty of handshakes.

Whatever comes out won’t be good enough—but that’s OK, you’re Lancia! You are driven by the fire to perform, and miraculously, maybe, there’s still someone left over from 1974 who can gently articulate (and wildly gesticulate) why it’s important you simply MAKE SOME CARS.

You are Lancia. Lancia began by building cars for racers and enthusiasts. Engineering and quality are features sorely missed from modern vehicles—both combined is, in large part, why Lancia’s style is so rooted in utilitarian elements. Box flares. Vents. Flaps. Driving lamps (fog lights).

To paraphrase Lancia’s history, how else can a maker build a high-performance, driver’s machine without those elements?

Lancia could be slugging it out with Polestar for premium EV supremacy, and instead the brand is stuck—for whatever reason—holding tea parties for toboggans.

I’m convinced pros like Jean-Pierre Ploué and his design staff know where Lancia is going. We’re all rooting for you. So let’s skip the executive lounge and get there on a direct flight next time…

There’s an Amazon company fan and employee—seriously, stay with me here—who has been vlogging his experiences with various (Amazon) delivery vehicles. From mishaps during the day to spotting semi-autonomous delivery robots, Friday Adventure Club has made his channel pretty much all about Amazon.

A bit strange for a creator, but hey—if you want to know EVERYTHING about the Amazon delivery vans made by Rivian, this is what to watch. Not only will you immediately start scouring auction sites for used examples, but now you’ll have a better idea of how one of the largest companies on earth is integrating EVs onto its routes.

From what I’ve seen, Rivian is producing the most clever delivery van…ever? 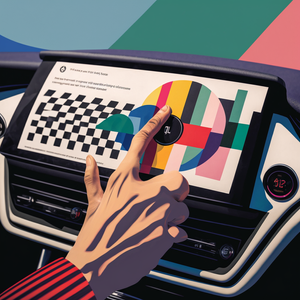